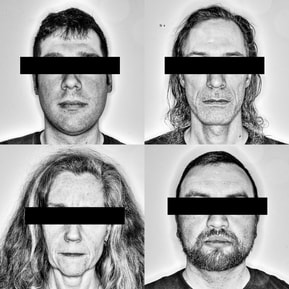 FREE SOIL video premiere and release 3/ 6/ 2020
Free Soil is a proletariat union compromised of teachers, independent contractors, community administrators, union workers and public servants based out of Washington D.C. Tasked to spread accurate information regarding current afairs outside of the traditional – corporate controlled outlets, Free Soil provides documented demonstration in the form of audio/ visual presentation both in media and live events. While explicitly an anti-fascist organization, the group is strictly non partisan and holds no allegiance to any political party agenda.
Live presentations are a mesmerizing experience in sensory overload. Incorporating gut rattling sonic dynamics, challenging video content and hypnotic strobes and lighting, each piece is based on specifc themes incorporating statistical information on subjects such as fascism, government and corporate corruption, gun violence statistics, colonialism/ imperialism, climate change, and current social issues.
COMING 2020-
THE AMBIENT EYE     GEL-SOL
TRISTAN WELCH     BELLY FULL OF STARS
FLASH SALE- "HORSE HEAD BOOKENDS" BY GEL-SOL
12" 140 GRAM VINYL WITH SPECIAL 5- INSERT ARTWORK PACKAGE ONLY $10.00 PPS
listen/order
VERSES SAMPLER Vol. 3
20 pieces by label artists and friends
LISTEN/ ORDER
DOMINGUES AND KANE- ROUGH MAGICK
Classically trained cellist and viola da gamba player Amy Domingues and multi- instrumentalist/composer Dennis Kane (The Hunted Hare) have performed for years in the Washington, DC indie/experimental scene both solo and in collaboration with others. Finally working together under the name Domingues & Kane, they weave the eloquent resonances of the viola da gamba with electronic treatments, keyboard, and guitar to create a rich sonic fabric. Drawing from traditions as varied as Renaissance counterpoint, basso ostinato, and improvisation, the duo forged a new instrumental genre all its own, resulting in the 2016 release of “Gut + Voltage: Viola da Gamba & Electronics in Synthesis” (Verses Records).
On their latest release, “Rough Magick”, Domingues & Kane explore the compositional and sonic possibilities of the viola da gamba and electric guitar combination. There is more experimentation in the playing, the sound is symphonic and atmospheric.
listen/ order
DMLLL- STORIES FROM A CRUEL PLANET
“Stories from a Cruel Planet”. Self written, performed, recorded and mixed, DMLLL (Damla Bozkurt) cites direct inspiration from the often times cruel world that we live in. “Children's Game in a Bomb Crater” was composed for the children in Aleppo. “A Tango in Tear Gas” for the resistance at Gaza border. “Humanity Washed Ashore” for refugees who have to leave their homes because of war. The compositions are based largely on arrangements for violin ensemble, with additional bass, synth and piano, plus guest appearances from friends Erdem Baser and Nedim Ruacan.
A themed series of explorations for Damla, “Stories from a Cruel Planet” puts a heavy emphasis on compostion, dynamics and harmony, with a fine balance between space and explosive virtuosity. This work represents a deep understanding of modern composition and discipline as well as emotive performance, and the results are an extremely emotive and moving release.
LISTEN/ order
THE HUNTED HARE- NOCTURNE

“Nocturne” is the third release from The Hunted Hare, the solo guitar project of Dennis Kane (Red Spells Red, Domingues & Kane),  Less pastoral and summery than the 2018 release, “Lost Wilderness”, the songs on “Nocturne” are inspired by, and evocative of, the night.  Taking inspiration from Robin Guthrie of the Cocteau Twins, 60’s & 70’s Italian movie soundtracks and Baroque forms, the sounds are deep and personal, but not necessarily dark or foreboding.
LISTEN/ order
RED SPELLS RED- SECRET SOUNDS
​ELECTRONIC EXPERIMENTS
LISTEN/ order
WENDY EISENBERG/ SHANE PARISH
NERVOUS SYSTEMS
LIMITED EDITION 12" VINYL
​NUMBERED AND HAND SCREENED ALBUM ART
AVAILABLE NOW
"Both are amazing guitarists with a backgrounds in experimental music, who have come together here to create some wonderful sonic lattices which appear to weave themselves before your very ears. The fact that these improvisations were recorded within hours of their first meeting is nothing short of remarkable.
This may sound a strange thing to say, but listening to this set takes me so far away that I forget that I am listening to two guitars, because the sound here is so dense and intense that the means is totally overtaken by the outcome… this is such an amazing performance… a moment in time which has been wonderfully captured."
-Simon, The Fragmented Flâneur​ , Psych Insight Music​​
LISTEN/ order

"40 Hours is a conceptual force of radicalism. It’s a protest album, but the protests are contemplative. There’s room in Welch’s music to ponder, rare in today’s society. There are no opinions shoved down your throat. Welch strategically and impressively uses a sea of guitar loops to ease into a soothing mood, allowing the listener to engage in their own thoughts and ideas. "-  Chad Beattie, Splice

listen/ ORDER
We are proud to be carrying 'Salad Days' by our good friend
PATRICK BATES.
​ Limited edition, 12" white vinyl with full color insert artwork and digital download.
"Salad Days could also represent the spirit his music speaks to. It wouldn’t be unfair to compare the album to many great acts of the modern rock era: The angst and power of Sunny Day Real Estate, the intricate multifariousness of Radiohead, the mathematics of The Dismemberment Plan, the glory days of Omaha via acts like Cursive, that brass-infused swagger of Afghan Whigs, the melodic sensibilities and sincerity of Copeland.
The production value and mix is clean and sharp — the sound essentially glimmers."
​-Noise Journal

The Hunted Hare- Nothing is Always