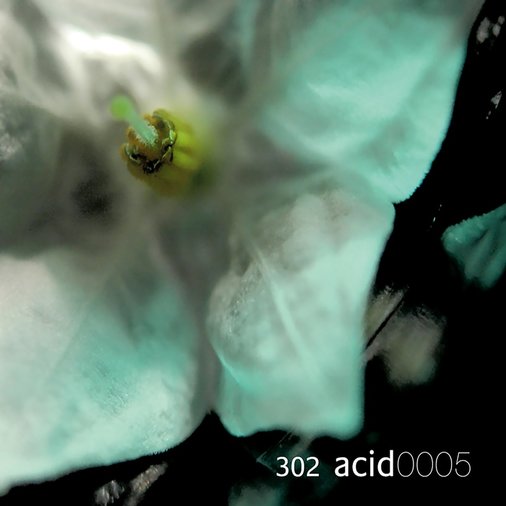 listen
302Acid is:   Justin Mader,  Andrew Reichel,  Doug Kallmeyer
with the help of: Dempsey Hamilton, Ryan Hicks, Robin Bell, Monica Stroik, Ben Broeking
The Wire
302 Acid
EVEN CALLS
If the name 302 Acid suggests an unhealthy interest in the sound of a certain legendary Roland bass station, then forget you ever heard it. As it appears on this their debut album, thereʼs nothing minimalist or retro about the music of this Washington DC trio. Even Calls is an almost continuous swathe of densely arranged sound, multi layered and amniotically appealing. The swelling, substaining tones of Douglas Kallmayerʼs electric double bass – sometimes bowed, sometimes plucked, always heavily treated – underpin most of these pieces. This
unstinting flow of low-frequency tones serves as a rich, loamy subsoil in which the rest of the music takes root. Itʼs clear from the many twists and turns that live improvisation is as important as programming for 302 Acid; a piece like ʻRoad Trip to Tokyoʼ incorporates lovingly nuanced percussion – all rimshots and lithe, darting hit hat fills – into a rising tide of sweetly distressed white noise. And itʼs a finely calibrated dub sensibility that holds everything in place, a tuned understanding of when to drop the fader and let some space into the mix – ʻMortariggusʼ is a spacious interlude that offers hovering, Frippertronic drones and suggesting distant cavernous spaces with economic poise. It swings
without pause into the hustling forward drive of ʻPush Buttonʼ, and multitudinous clouds of sound gather again.
– Chris Sharp


“A deep fascinating work and a hell of a way to spend an hour.”
Bulb Magazine

“You canʼt help but admire the emotion of it all... this is stunning.”
Future Music

“302Acidʼs Even Calls  is everything a classic “ambient” album should be.”
XLR8R Mag

“...probably one of the most original releases of this year ʻ05, ranging from different influences such as deep cinematic ambient,
electronica, jazz structures, classical and even progressive post-rock.”
Revolve Magazine

“[Even Calls]  features highly complex sculptures of beeps, clicks, cuts, samples, electronics, soundscapes that together explore
imaginative dark & psychedelic atmospheres... it is intense and pushes the experimental envelope a little higher... itʼs not
something youʼll want to listen to as background music. To discover the full potential of its complexity, you will want to opt for
about 60 minutes of concentration. Happy discovery!
Freestyle Mag

“Even Calls  is an easy record to put on the stereo; you just set the repeat to infinite and forget where it starts and ends. Your
room just fills up after awhile, the shadows moving and dancing in time with the beats. This one gets played a lot in my office
after the sun goes down. It makes the space less cold, less empty. ”
Igloo Mag

“302 Acid busy along lines to break down the barriers between all sort of musics and create a richly varied dance music that
never has a boring moment. I found myself playing this release a couple of times in a row, and never had the impression of
hearing the same thing twice.”
Vital Weekly

“Thereʼs a darkness to the music, like a nighttime drive through the dangerous part of a high-tech metropolis. The soundtrack
aspect is enhanced by the tracks flowing into each other... this is a good one for turning out the lights, turning up the volume,
and watching the blinking lights on your hi-fi.”
Angry Robot

“If their first EP hinted at jazz ambiences, this album is a much more diverse, yet focused, affair. With their applied electronics
persistently surrounded with live instrumentations, and a fine ear for production, 302 Acid are a welcome addition to the Em:t
roster...”
The Milk Factory

“302 Acid have both feet planted firmly in the future, but theyʼve got both hands reaching back to rattle a complacent musical
present... this is well-crafted music by a trio in complete command of their sonic arsenal.”
E/I Mag

“[Even Calls]  exhibits a fullness and depth that presumably comes from a flawless melding of the three memberʼs contributions.
Grooves Magazine

“Even Calls  is for those who need an extra rush of electronic bliss when the lights go out late at night”
Gaz-Eta
​
“302 Acidʼs Even Calls  is an exciting and intense collection of electronic rock. Itʼs unique enough to begin to carve out itʼs own
territory, a sort of jam-band ambient music”
Synthtopia

"302 Acid should be avoided at all costs"
Aurally Insulted show attendee/ writer from Washington, dc.